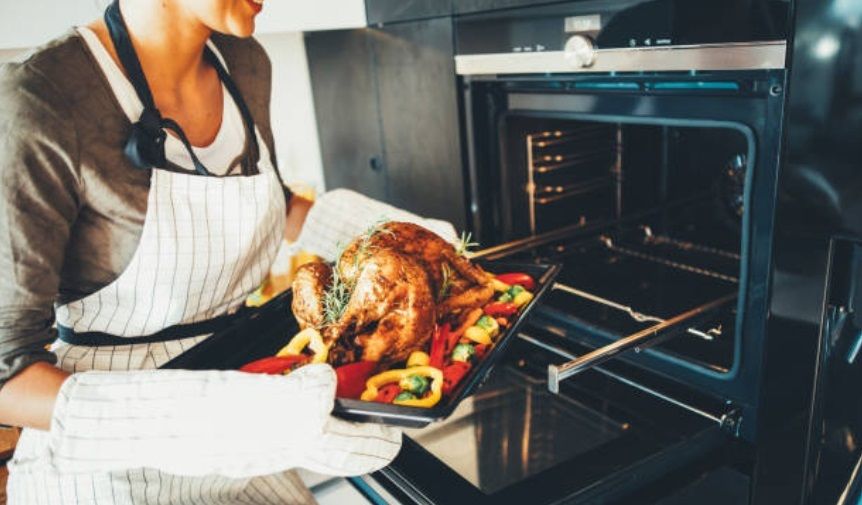 Are you not happy with your microwave’s results and looking for an alternative? Wonder if the turbo oven that you saw on TV is a scam?

Which is the Best Turbo Oven? Before we answer that, here is some information on what a turbo oven is and how they work.

They are sometimes known as Halogen Cookers, Convection Ovens or Infrared Ovens.

The turbo oven is electric, which means you can actually cook on the dining table if you have somewhere to plug it in. Because turbo ovens are compact and electric, they are also portable – an ideal present for a young student who is living in a small room with nowhere to cook or for someone who has a small kitchen.

How Fast Do Turbo Ovens Cook ?

Usually about 50% faster, and they use about 30% of the energy of a normal cooker so you make considerable energy savings. Because they heat up instantly, you can cook food from frozen.

However, unlike a microwave oven, turbo ovens will brown your potatoes and turn the skin of a roasted chicken satisfyingly roast-colored! Some turbo ovens come with stacking shelves so you can cook two things at once – and because the heat in the oven is uniform there is no need to swap them round to ensure they both cook properly.

You can cook anything in a turbo oven that you can cook in a normal oven – cakes, bread, roasts, vegetables and so on. One advantage is that it doesn’t heat the room when operated, so you can cook in it during summer without the kitchen heating up and you getting hot and bothered.

It’s an advantage at Christmas time too, as the turkey will get done quickly, leaving you less time in the kitchen. The other advantage is that it is easy to cook without fat, as you can get a wire grill to place within the glass bowl, and place your food on top of this, allowing the fats to drip down and away. 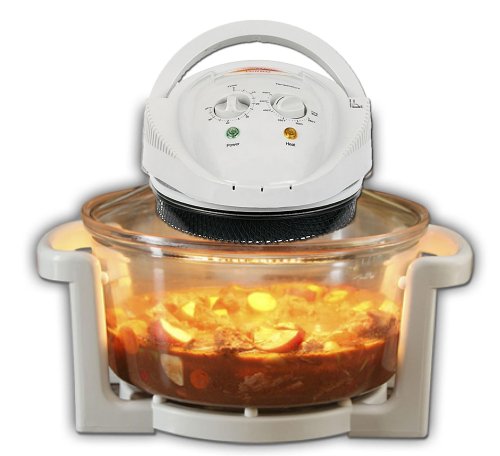 Flavorwave Turbo oven is a favorite cooking appliance of many people. Hopefully, flavorwave turbo oven reviews can help you decide… As compared to a standard convection oven, it not only prepares food faster, but the flavor of the food is also not lost at all.

Many working couples consider this a must-have appliance as with it your food not only gets cooked fast, but also you get to eat all the healthy food even in your busy routine. There are many Flavorwave Turbo oven reviews present on the web which helps you in deciding whether buying it suits you or not.

According to the people who are using the Flavorwave turbo oven, it saves not only their time while cooking, but you can cook anything you want by using it. By cooking in this oven, you are doing yourself a favor as whatever you are cooking in it is fat-free as you don’t have to use oil.

You can prepare your family’s favorite and nutritional food by using this oven, even if you have just returned home after having a hectic day at work because of its fast cooking ability.

This infrared oven comes with a 1300 watt halogen lamp, and also has a glass bowl in which food rests. It comes with two stainless steel racks and an expanded ring, so you can increase the height of the oven to cook more food. All the parts are removable making them easy to clean in hot soapy water.

This has manual controls, so you can decide yourself what temperature to set it to and for how long. It comes with a stainless steel tong, cooking chart, small recipe book and an owners manual.

Safety and Durability – not like most of its competitors it uses a glass bowl instead of plastic. It’s proven that plastic will release toxic elements like BPA under high heat. Also, a lot of customer reviews indicated that the plastic bowl cracks easily.

FREE Extender Ring – with extender ring it increases the capacity so it can cook big pieces of meat, like turkey, as well. When comparing it with other brands, for the same price in amazon.com at least, they don’t come with it.

Easy to clean – Since it uses a glass bowl instead of plastic(most of its competitors use), it’s a lot easier to clean. As you may know, plastic get stain easily, e.g. tomato sauce.
Also, the detachable cord makes it safe when it comes to cleaning.

Affordable – it’s not the cheapest. But with all the features that it has especially the glass bowl and free extender ring, it really worth it. 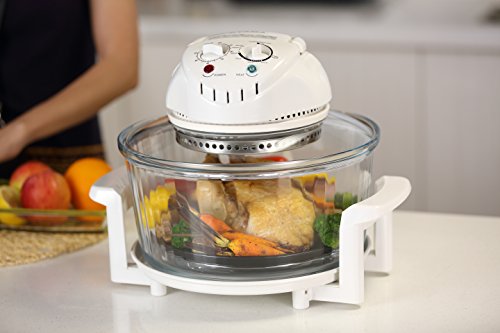 It cooks by placing food into its glass container and then it begins the baking process. It can bake up to 482 degrees fahrenheit/250 degrees celsius.

The Oyama turbo oven is great in that it is extremely simple to use. For example, to bake a small chicken, it is extremely easy to just drop the chicken into the glass container, then bake it for the proper time. If you wish to add some seasoning or anything else, it is as easy as taking off the cover, adding what you need to add, then putting the cover back on.

It also has suggested times on the timer as well, this way if you are not sure how long something needs to be cooked, you’ll have an idea of a proper time.

One thing that is less than desirable about the Oyama turbo oven is that it will require constant cleaning. Because everything in it is so compact, there is a good chance of juices from the food that is being cooked to stick to the bottom of the container.

It is imperative that you clean anything on the Oyama turbo oven directly after using it. If it is not cleaned directly after being used, the residue will likely stay on the container (as well as other things surrounding) forever. 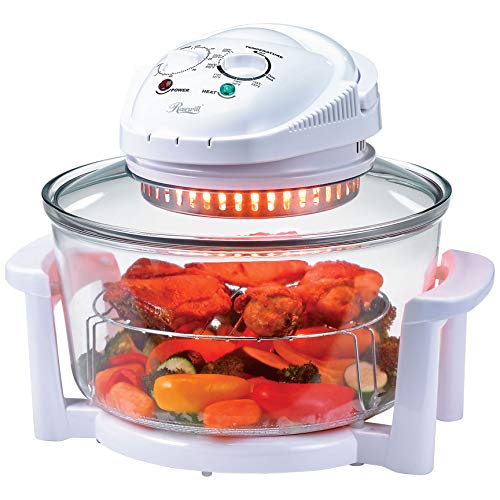 Not many think of anything involving the words “Infrared Halogen rays” when they think of cooking equipment, but Rosewill has come up with a product that does indeed use infrared halogen technology to cook things. The Rosewill turbo oven contains a glass container that can cook up to 17 liters (12 without the 5 liter extender), and can cook nearly any kind of meat.

The most interesting part about the Rosewill turbo oven is that it uses infrared halogen technology to cook. This saves a lot of energy that would otherwise be wasted when using a traditional oven. Because there are not many components to the device, it is extremely easy to clean as well. Everything is easily removable and detachable. Also, many users report that it does not dry food out the way an air fryer would.

Despite these fantastic features of the Rosewill turbo oven, there are also some things that need to be considered. Although it does not leave food as dry as an air fryer would, it still leaves food dry in general after cooking.

It is not comparable to a traditional oven in this aspect, as the traditional oven does a better job of retaining juices in most meats. Additionally, the Rosewill turbo oven will require constant cleaning, as everything in it is so compact when cooking in it.

Prepare to clean this turbo oven frequently. Finally, purchasing a warranty on the Rosewill oven is almost mandatory, as the components are not sold separately. This means if one component malfunctions or breaks, the entire unit must be replaced. 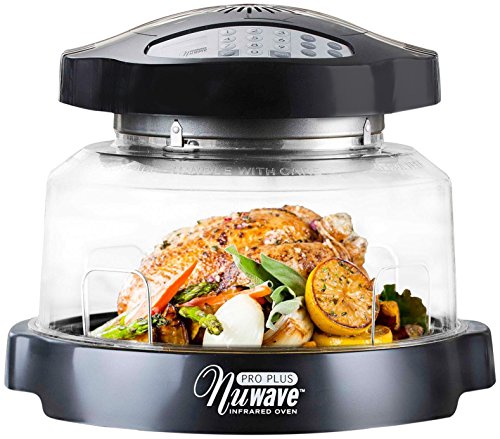 Cooking technology has come a long way, and the NuWave turbo oven has proved that the traditional ovens, while they still have their uses, are not nearly as necessary as they used to be. The appearance of the NuWave turbo oven is comical: It resembles a giant lamp. But it proves itself as a very useful cooking device.

The most interesting thing about the NuWave turbo oven is that it has digital temperature controls. This is one of the best features of it, as most other cooking devices still use analog controls. The glass dome it comes with has four openings on the corners, which prevents steam from building up inside of it.

This is something that is not common to the typical air fryer or turbo oven. These features make the NuWave oven worth getting.

There are certain things to watch out for when it comes to the NuWave turbo oven. The first of these is that it is perhaps a little too powerful. Before cooking something in the oven, most people preheat the oven.

It also does not cook evenly. When something is cooked in the NuWave turbo oven, it must be flipped halfway through the cooking time. This could also trip up people using it for the first time.

Besides the superior cooking result, there are a lot more advantages to Turbo Oven.

First of all, how does turbo oven work? Actually, it’s a very innovative design. It combines infrared waves, halogen heat and convection cooking in one device. The halogen bulb heats up the oven to your specification, and then the built-in fan circulates the hot air inside to ensure the meat is cooked evenly from top to bottom.

The infrared waves cook the meat from the inside out, so the meat is cooked thoroughly. With this method of cooking, it can cut down the processing time by 1/3 compared with conventional ovens. Better yet the result is outstanding as it can keep the juice inside when crisping the outside.

Convection ovens work by fanning hot air (hence the word “turbo”) so that the heat is distributed uniformly (unlike an ordinary oven where it is hottest near the heat source). Because of this, the food cooks evenly all over and cooks much more efficiently and therefore faster than normal.

They are usually combined with a halogen or infrared heating element, so the halogen lamp heats the air first and the fan then circulates the pre heated air. Halogen is intense so it heats the air faster than the usual heating elements in ordinary ovens, so this speeds cooking even further. The halogen lamps are usually fitted in the lid, and the cooking pot is usually made of clear tempered glass so you can watch what is being cooked.

To get the best out of your turbo convection oven, I recommend you get a cookbook with recipes designed especially for convection oven cooking, rather than trying to mess around and adjust the cooking times in your normal cookbook (turbo cooking times are much shorter and you generally need to set the temperatures lower).