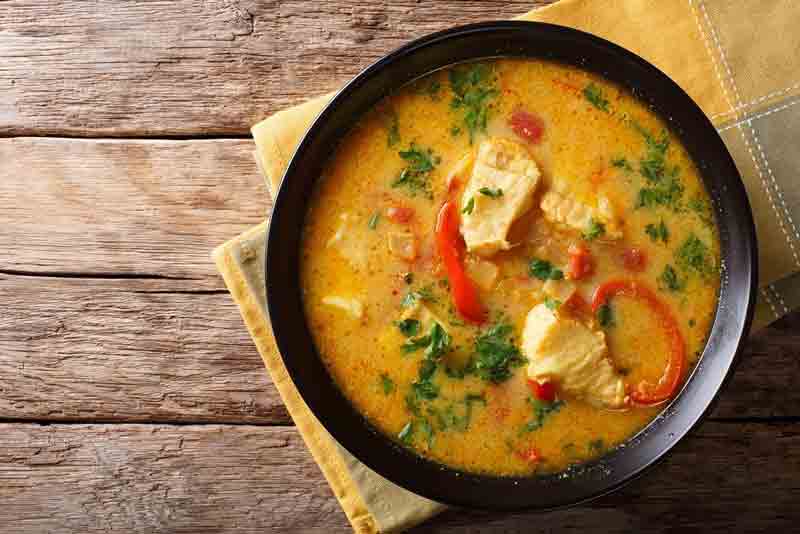 Broths are staples to any kitchen and go with almost everything, be it rice, soups or casseroles. It’s a popular ingredient because of its rich flavor that elevates any dish to a better taste. It’s not expensive and comes in different forms like mixes and powders in the market.

They are different from stocks as they are denser and pack a bit more flavor. This is because broths have some seasoning and salts in them that stocks don’t. However, since people use it so often, it’s not unnatural to run out of broth unexpectedly.

Therefore, to make sure you can cook up that perfect dish without worry, here we’ve listed some quick and simple broth substitutes that you can use for situations exactly like that.

Whether it’s chicken or beef stock, it’s possible to convert it into a dense broth anytime. All you need is some seasoning, red wine, and fresh herbs. You can add some salt to it as per your preference.

Boil the seasoned stock and leave it to cook for 10-30 minutes. This allows all the flavors from the seasonings to get into the stock properly. Finally, you can use a filter and collect the ready broth for storage and use.

Add garlic, bay leaves, and parsley to soy sauce along with other herbs and seasoning salts. It is essential to add the seasonings in small portions because too much or too little of it can lead to the taste being entirely off.

As many famous chefs do, it is good to taste as you go along with the recipe. If the feeling doesn’t turn out as you wanted, it’s best to start over. Also, you can try using white wine if soy sauce isn’t available.

In almost all recipes that call for broth, it is possible to use bouillon cubes or granules instead. The ratio is 1:1 for bouillon cube to the broth. That means, just 1 bouillon cube can be dissolved in boiling water (8 ounces) to substitute for every cup of broth required. Bouillon is a popular substitute for chicken stock or broth.

But you can use it as a beef broth alternative too. Marketed bouillon cubes contain high amounts of sodium. So, it’s better to have a higher quantity of water than bouillon. Usually, you can add 1 cube to every one and a half cup of water. Many brands make bouillon with less sodium, including- Wyler’s, Campbell’s, Marigold, etc.

It might come off as a surprise, but it’s not uncommon to switch one broth for another. If you are running short on chicken broth, you can easily use beef broth instead. Again, any vegetable broth can be used instead of chicken breast or beef and vice versa.

Concurrently, take note that some broths are more natural to substitute than others. While it may be possible to switch out the chicken broth for beef, the taste won’t be the same.

A popular gluten-free alternative to soy sauce is liquid aminos. Worcestershire or Worcester sauce is a liquid native to the UK and can also substitute soy sauce. Both these liquids usually have vegetarian bases and are used in dishes like beef stew, chili con carne or even with hamburgers.

Besides, liquid aminos are a popular substitute for vegans as well as for paleos. They are made from soybeans.

One of the most effortless substitutes for beef broth is mushroom broth. It’s easy to make and rich in flavor. You can use either fresh or dried mushrooms. Add a sautéed carrot, yellow onion, some mushrooms along with seasonings and herbs like thyme, parsley springs, bay leaf, peppercorns and salt to a pan of water and bring the mixture to a boil.

Once boiled, you should allow it to simmer on low heat so that all the flavors get extracted. When all the vegetables have a mushroom flavor, and the mixture has reduced, the broth is ready. This might take about an hour. Similarly, adding some red wine and soy sauce to this can make the broth taste even better.

Some also add miso paste for a more exciting experience. As mushrooms have a meaty flavor to them, they can be passed off quickly as a beef-based broth in any dish. Thus, button or assorted mushrooms are suitable for this recipe.

Whether you are cooking gravy or braising meats, beers and wines are an excellent substitute for beef broths. You can mix some light beer with water in equal proportions to dilute it. This can be used to deglaze a pan, make a wonderful sauce or even in stews.

On the other hand, since wines and beers are flammable, they should be cooked cautiously until all the alcohol gets evaporated. There’s always an option to use non-alcoholic beer as well. You can use either red wine or white as per your preference.

At the same time, be aware of the heat during cooking with an alcoholic liquid. You don’t want to end up setting your broth ablaze.

Beef broths are so popular and widely used. It is essential to have some alternatives up one’s sleeve in case of emergencies. Some beef-based broth substitutes are mentioned below:

With these quick and simple broth substitutes and beef-based substitutes, you can always let your dishes burst with exciting flavors no matter the situation.

You can visit our recent review about Best Turbo Convection Ovens to get proper guide how to cook perfectly.

Helpful Item Reviews For your Kitchen :