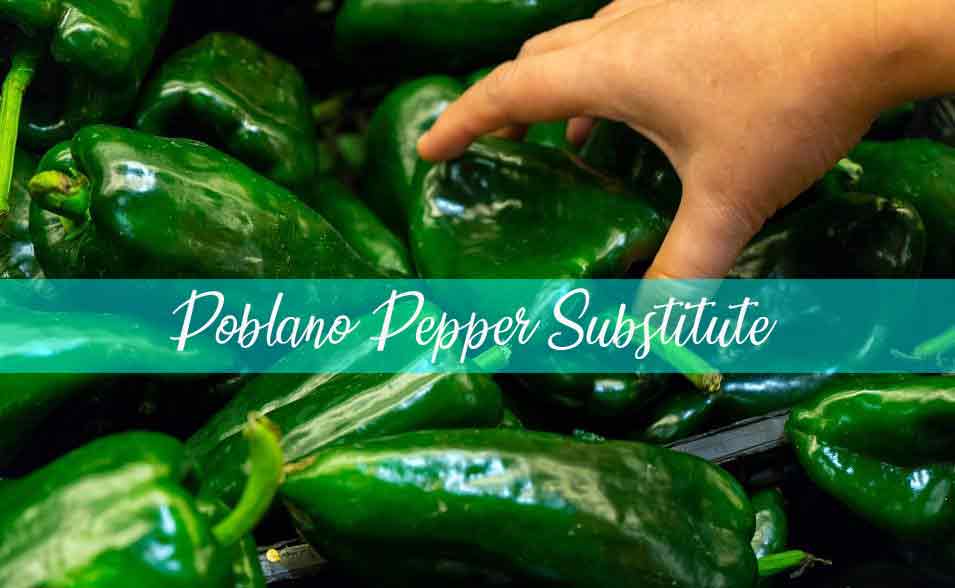 With the rise of popularity of Mexican food across the globe, the use of the famous Mexican poblano pepper has also increased. It has become one of the key ingredients for captivating taste buds everywhere.

However, to help you get every poblano dish right, we’ve listed here everything you need to know about poblano peppers and its substitutes.

Since these are mild peppers, you can use them in a variety of dishes. Poblano peppers give a mellow sweet taste after being cooked along with their spicy kick. They are often compared to New Mexican chilies.

So, whether you are making a cornbread, a chili, enchilada or a salsa, poblano peppers are exactly what you need to spice them up and bring the right amount of flavor to the plate.

What is Mexican Poblano Pepper?

Poblano peppers are native to Mexico, and their name comes from “Puebla”-a Mexican state. It is said that poblano peppers have originated there. It is a mild chili pepper with a taste like Pasilla peppers. In some places, they sell it as chile anchos.

When unripe, poblano peppers are dark green. They turn either brown or red once they ripen. It is easy to spot an immature poblano pepper due to its deep purplish-green color. Poblanos are usually large with thick skin. This makes them suitable for sausage stuffing and baking.

Likewise, the average size of a poblano pepper is around 4 inches. The plant grows up to 25 inches and has multiple stems. In Puebla, it is the most popular pepper grown.

The chiles en nogada is the signature Mexican Independence Day dish as it incorporates all the colors of the Mexican flag into the plate. They are also used to make cornbread, and queso (cheese) dips for snacks.

Level of Spice and Taste

The green poblano peppers are less spicy compared to the red ones. Besides, it’s important to know that in case of these peppers, it’s sometimes a hit or a miss. If you buy a batch of poblanos from your local market, chances are you’ll get one or two peppers which are a lot hotter than the others.

On the Scoville heat units, these peppers usually range from 1,000 to 2,000 whereas, jalapenos are generally around 2,500 to 8,000 on the same scale. A green bell pepper has a count of 0 SHU on the Scoville scale. So you get an idea of how a poblano pepper is compared to that.

In terms of taste, poblano peppers have an earthy taste to them. You can describe their flavor as slightly smoky unlike a jalapeno with a fresh grassy taste.

The dried poblanos, i.e. anchos, are popularly used to make earthy Mexican sauces. When cooked up, a bright green poblano pepper gives an even milder spicy taste along with some sweetness.

Poblano pepper has a substance called “capsaicin” in it that has many health benefits. Apart from its sensation of heat, once you eat it, capsaicin is responsible for helping your heart by controlling the triglyceride and cholesterol levels.

On the other hand, fibrin is a substance that is responsible for blot clotting. The capsaicin present in poblano peppers helps your body dissolve fibrin and prevent the risk of blood clots in the future.

Moreover, poblano peppers also help cancer patients. They inhibit the growth of cancer cells in the case of both breast and prostate cancer. For arthritis patients, poblano peppers are good news as they help to reduce and address the arthritic pains.

To be more precise, one poblano pepper contains 95% vitamin C and 8% vitamin A and 8% vitamin B6. It also has 5% dietary fiber and some amounts of vitamin B2 (Riboflavin) that helps in fighting cancer.

Accordingly, another cancer-fighting element is folic acid as it helps the body to maintain its cells while producing new ones. Folic acid prevents changes to DNA that might be fatal later on. Poblano peppers have 4% folic acid in them, and thus they are cancer-fighting natural drugs.

In case you’ve wanted to go on a diet, poblano peppers can help you out. These peppers can help to lose weight as they literally have zero fats or calories in them. They help to maintain a good “lipid profile” and reduce the risks of obesity also you need to maintain the proper food items.

Furthermore, these peppers even act as natural analgesics due to their potassium content. Capsaicin, vitamin B2, and potassium together work to reduce headaches, menstrual cramps, and inflammatory aches.

The storage life of poblano peppers is usually two to three weeks. They need to be stored unwashed in the fridge. You can store the peppers that have been peeled and roasted in airtight containers for about 3 days. The longest time you can keep these peppers is three months. Frozen peppers can be stored that long only.

If you are storing ancho peppers, the dried poblanos, that means you can keep them up to a year. However, dry places are preferred for storage.

These peppers are very similar to poblanos. It is because they have the same kind of thick skin and girth that allows for stuffing. But they tend to give twice the heat compared to poblanos. They are sweeter than poblanos after being cooked. So, the amount needs to be slightly altered when using this instead of poblano.

This pepper is milder than poblano and even sweeter. Its walls are thinner so stuffing them needs a more delicate hand too. You can use these in chile Relleno recipes, but they don’t kick as much heat.

Bell peppers are super common and can be used for stuffed chili recipes as they have thick walls and large size. Besides, it’s a fact that bell peppers aren’t as flavor-packed as poblano peppers. They don’t have that spiciness and is not the best alternative.

These are good substitutes for fresh poblano peppers. Italian frying peppers have thin walls, sweet taste, and a crisp texture. They are suitable for roasting.

These can easily substitute dried poblanos as they have the same size and shape. They taste a bit spicier and look brown. But they give a cherry-like aftertaste that many think it’s similar to chocolate.

Since everything you needed to know about poblano peppers and poblano pepper substitutes is right here, you can go ahead and experiment and recreate any dish you want.