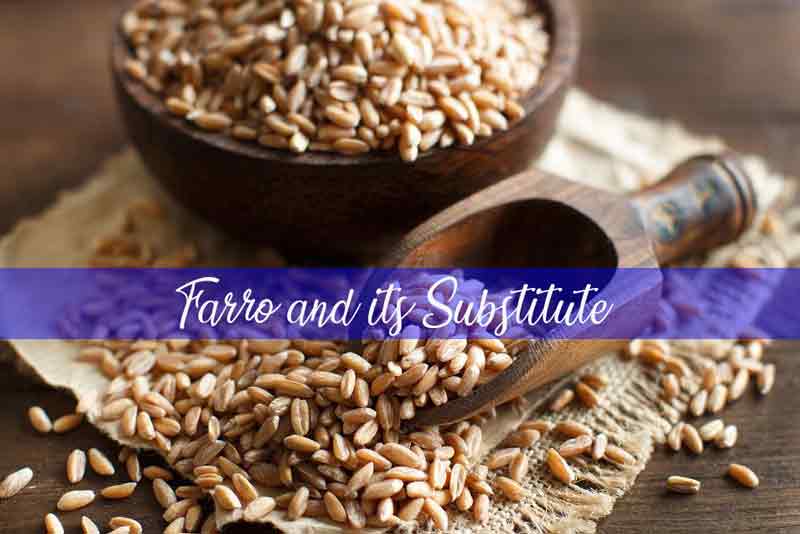 Doctors all over the world often suggest the Mediterranean style diet considering it to be the best. Farro, a form of wheat grains, is a prominent part of this Mediterranean diet. It is gaining popularity as the stores nowadays carry many more grain varieties, and people are becoming more health-conscious.

From soups to salads, farro is now being incorporated in menus around the globe. But you might still have any questions about this trendy food item. To help you out, we’ve put together all you need to know about farro and farro substitutes in one place.

So the next time you go to buy grains from the local grocery store, you don’t have to worry about mixing up your ingredients at all.

What are Farro Grains?

Farro is an ancient grain made from emmer wheat, spelt or einkorn wheat. In Italian cuisines, the use of farro is extraordinarily widespread, and they differentiate the species as farro grande, farro piccolo and farro medio.

It is sometimes considered as the compost of wheat grains as well. Its use and cultivation date back almost ten thousand years. It was even found in the Egyptian tombs and is said to have been a staple for the Roman legions. Farro can easily be used as an alternative to pasta or rice as it is rich in fiber, salts, and vitamins.

However, the modern-day farro mostly grows in the central and northern parts of Italy, and emmer wheat is the actual source of true farro. There is another species called Triticum monococcum that is also called “little farro”.

The farro made from spelt wheat (Triticum spelta) is often called “fake farro”. As confusing as it may seem, it’s simple to know which one is true farro once you’ve become used to using it in dishes.

Benefits of the Ancient Grain

Compared to other grains or rice, farro is much more nutritious and beneficial to health. The health benefits of this ancient grain include-

Farro from emmer wheat grains contains a lot more fibers than other grains. One-fourth cup of this whole grain contains 5 grams of fiber. Since fibers help to maintain blood sugar levels and cholesterol, it is good for the heart or diabetic patients.

In general, whole grains are a great source of various antioxidants. Since farro is a whole grain, it’s no exception. It has selenium, carotenoids, polyphenols, and phytosterols. Researchers have found that consuming polyphenols for an extended period can prevent cardiovascular diseases, cancer, osteoporosis, and diabetes.

Similarly, the risks of neurodegenerative diseases like Alzheimer’s or Parkinson’s disease gets reduced by daily intake of polyphenols. A study showed that regular consumption of whole grains could reduce the risk of diabetes by up to 32%.

Farro has more protein than whole-grain wheat and brown rice. If you combine farro with some legumes, your diet will have enough protein where you do not need any meat at all. This is a big reason why vegetarians like it so much.

Besides, if you are looking to build up some muscle mass, protein-rich foods are exactly what you need. Since farro has lots of amino acids, it makes you feel fuller and helps to lose weight easily.

Farro can help you to lose weight because of its fiber content and protein. It is better than refined grains. It reduces the feeling of hunger and makes you feel full.

You can digest farro slowly since it has a lower glycemic index. This results in a slower rise in blood sugar levels along with gradual energy production in the body. Studies show that if someone takes whole grains thrice a day, it helps lower BMI and body fat.

People who have gluten sensitivity should not try taking farro grains. Studies have proven that to be dangerous. Farro contains a bit of gluten as it is a form of wheat, and that might make it toxic for some people. Anyone with celiac disease needs to steer clear of it.

If you are living in the US, chances are you’ve found stores selling farro that is without the bran. Removing the bran makes it easier to cook. But in places like Italy, the whole farro is found. This type of farro has the bran intact. Again, there might be semi-pearled farro in stores that have some part of the bran but not all of it.

You can cook farro in the rice cooker or on the stove. You can even use a pressure cooker if you want. The usual method of cooking farro requires soaking it in water beforehand. Soaking the farro helps it to cook. Average soaking time is around 30 minutes. If you are using pearled or semi-pearled farro with the bran, soaking is optional.

Accordingly, for each cup of dry farro, you can use two and a half to three cups of water or broth for soaking. If you keep the farro soaked for a night, cooking it will make it firm within 10 to 15 minutes. This firmness is called al dente in Italian meaning “to the tooth”.

At the same time, if you want to avoid all this complexity, you can just grind the farro in a food processor to have the outer shell break down first. Don’t have a food processor? You can use a spice grinder instead, and it’ll do the work just fine.

This is an obvious substitute for farro. It is gluten-free and super healthy, earning it the nickname “superfood”. In any salad, pasta or soup you can swap farro with quinoa. Although quinoa seeds are bitter, they taste better after being processed.

Barley is also an ancient grain and is still famous for its antioxidants and minerals. It can easily be used instead of farro because it also helps in heart health, lower blood pressure by providing lots of magnesium, potassium, and calcium.

This is another alternative for farro. Winter wheat is unprocessed wheat, and it tastes almost the same as farro. The only downside is that it takes more soaking time, and you need to cook it longer.

If you are allergic to farro, teff is a better option for you to try because teff tastes similar to farro minus the compound causing allergies.

That’s all you need to know about farro and the substitutes for farro to start on a healthier diet plan and avail all its benefits.