If you cook with olive oil, you will require an oil dispenser that releases just the right amount of oil and doesn’t completely drench everything in it. Here are the best olive oil dispensers available: 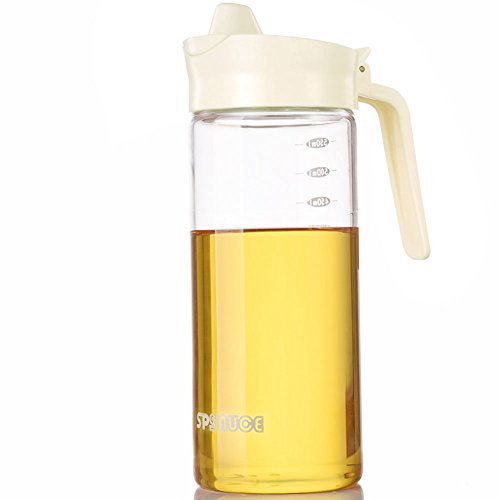 The one thing that makes people somewhat reluctant to cooking with oil is that oftentimes, it the propensity to spill from containers that they are kept in. This residual oil can make floors slippery and even cause pests in whatever area it is used. The Marbrasse oil dispenser is put together with components that prevent it from spills when sealed, and prevent unnecessary dripping when being poured. This also eliminates leaks, and can keep any area that it is used in free of residual areas. Another good thing about the Marbrasse oil dispenser is that it is a rather large container, being able to hold close to 20 fluid ounces. This makes it ideal for not only oil, but other substances as well. As it is designed specifically for oil or any other liquid that is used for cooking, it also comes with measurements in the form of milliliters on the side of it.

Although they are not particularly glaring, there are a number of flaws present when it comes to the Marbrasse oil dispenser. The container is made of glass, and while that has its benefits, it also means it could shatter when dropped. This is especially true when used in a kitchen setting, where the propensity to drop something is great. The Marbrasse oil dispenser also comes with more than a couple of components that prevent it from dripping. If one of those components is lost, this means it will be reduced to a glass jar. 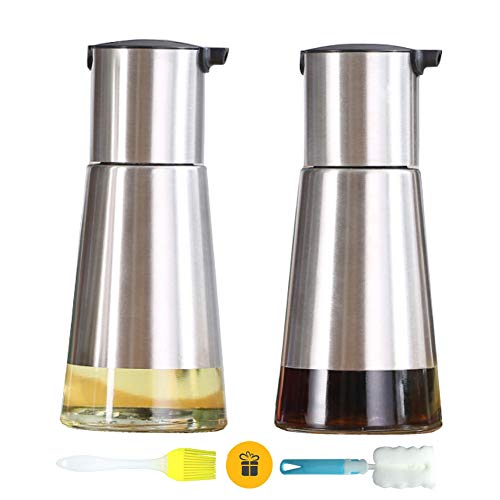 The problem with oil dispensers that are made of glass is that they have the propensity to shatter. They can also cause leaks and are very temperature sensitive. The Shinykdy oil dispenser have a stainless steel encasing, which means it can hold any temperatures and is shatter resistant. The only part that is made of glass is the bottom, this way you can see what kind of substances are in it. This particular dispenser comes in a pack of two which is also very useful for separating any kinds of liquids that are used. The spout is also designed to not drip a lot when pouring something, which is another good benefit.

There is a reason why this particular package comes in a pack of two, and that is because the dispensers are very small, each one holding only about 8 or so fluid ounces. This might not be enough for certain situations. Cleaning the glasses inside of the stainless steel casing can get a little complicated as well, as the glasses are rather small and need to be cleaned with a brush. 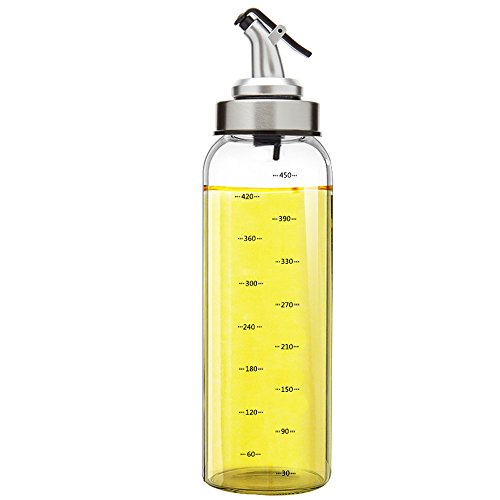 It is always a bit of a risk for oil dispensers to take the form of a glass. The Ranaphil dispenser is indeed made of glass, which means it runs the risk of shattering. And on top of this, the glass has a cylinder type shape, making it even more fragile. 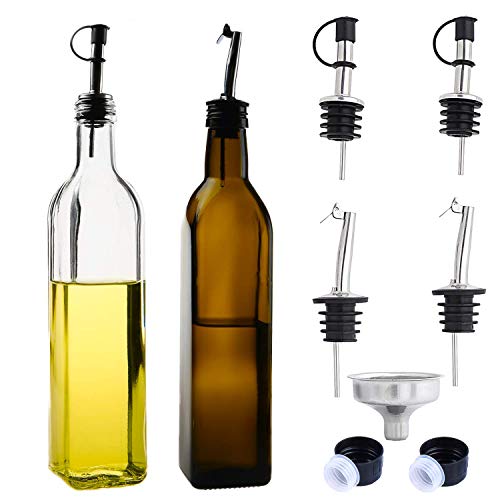 The common oil dispenser bottle typically suffers from a couple of things that generally affect their quality. First, many of the bottles are not as aesthetically pleasing as they could be. Many of the bottles, especially the ones that have degree scales, look like they belong in a laboratory instead of a kitchen. Another problem is that the bottles are made of standard glass, which do not offer as much protection as they could. The Stonekae oil dispenser bottle solves both of these issues. The bottles have a very nice design that looks like it belongs in a kitchen. Secondly, the bottle itself is brown in color, meaning it protects olive oil from sunlight. Although the mouth of the bottle itself is not big enough to directly pour oil into it, the Stonekae bottle does come with a funnel that allows one to pour oil directly into the bottle without making too much of a mess.

Like many other oil dispenser bottles, the Stonekae bottle has a spout, but different than other bottles, the quality of the spout on the Stonekae bottle is not as good as it should be. The spout resembles a straw, which does have a propensity to drip. This could affect the cleanliness quality of the bottle. It also comes with a lot of parts, which are quite small and easy to lose. 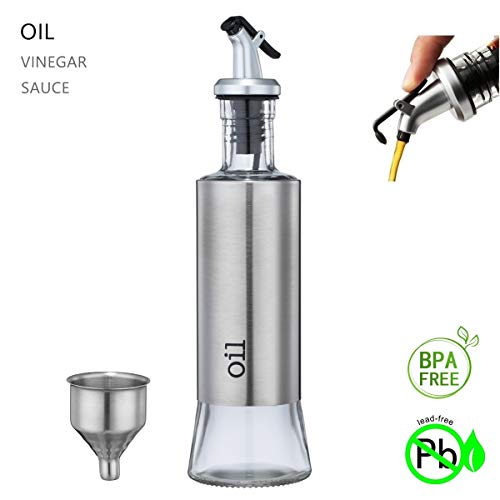 It is not often to see oil dispenser bottles that are not made completely of glass. One of the biggest issues that most of these bottles have is that they are made completely of glass which means they have a very high propensity of breaking when dropped. The Walls oil dispenser bottle is indeed made of glass, but it also has a steel casing, with only the bottom of the bottle not having casing. This makes it much more safe to use as the chances of it breaking when dropped are not as high. Another thing that Walls has done is label the steel casing on their bottles with either sauce, oil, or vinegar. While this is not anything very impressive, it is still a nice feature.

When it comes to actually pouring oil, sauce, or vinegar into the Walls bottle, there is a lot to be desired. A good amount of these bottles come with mouths that are generally big enough to directly pour a liquid into without resulting in a mess. If the bottle does not come with a mouth that big, they will be usually come with a funnel that can serve a similar purpose. While the Walls bottle does come with a funnel, this funnel is not big enough for anybody to pour any of these liquids into it without resulting in some sort of mess. 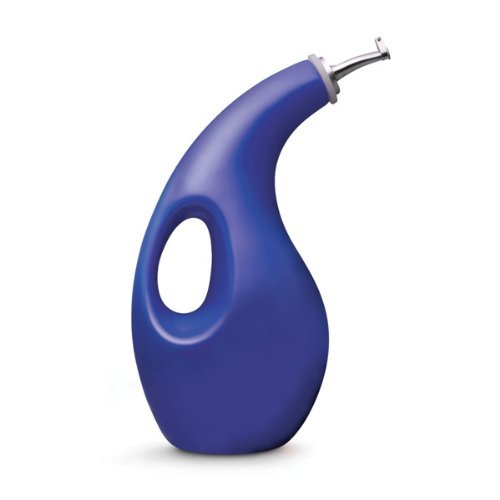 This oil dispenser is made from opaque stoneware which helps keep light away from your oil, which in turn preserves it longer. Thanks to the built in handle and narrow spout, it is easy to pour and control the flow of oil.It holds 24 ounces which is quite a lot – only go for this size oil dispenser of you go through a lot of oil. It is also dishwasher safe. 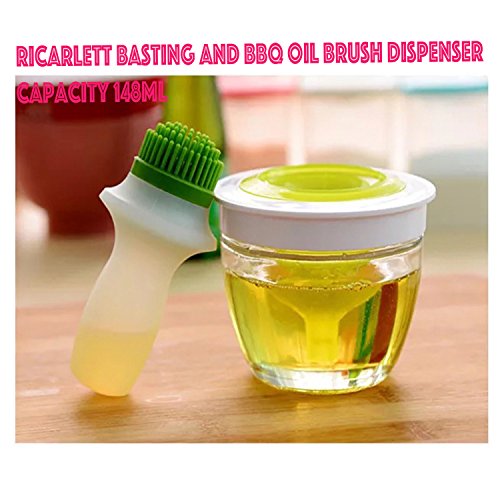 Chef’s basting tool olive oil,vinegar,salad dressing dispenser is a glass dispenser with a beautifully rounded shape that looks good when on display in the kitchen.The glass is tough shatter-proof silicate glass, which is safe in dishwashers. It comes with a collar around the spout to ensure that oil doesn’t drip as you pour. It has a 30 ounce capacity.Though this is an oil dispenser, you can use it to hold vinegar or other liquids.

How to clean an olive oil dispenser

If you’ve been using your dispenser for a while, oil can gunk up at the bottom of the cruet. Here’s how to clean it: fill it with a mixture of water, detergent and vinegar and allow it to stand overnight. Then add a handful of uncooked rice into the mix and shake the cruet hard. The vinegar should have cut through the oil, the oil should have attached to the detergent and the rice should act as an abrasive to dislodge any stuck bits. Then empty it out, and use dish soap and a baby bottle brush (which should fit easily through the neck) and give it a good clean. Rinse with fresh water, and your cruet should be clean!